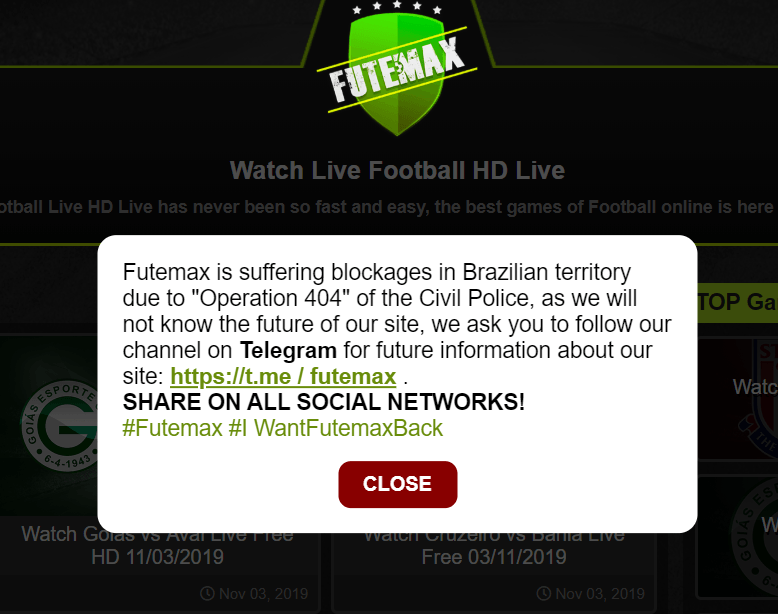 A massive operation in Brazil has seen police across the country take action against hundreds of ‘pirate’ websites and apps. The Ministry of Justice initially said that ‘suspensions’ had hit 136 sites and 100 apps but that number has continued to grow. Authorities state that they received assistance from US authorities including ICE and the Department of Justice.

Authorities in Brazil have periodically attempted to disrupt piracy in the region, including actions such as Operation Copyright that targeted a large private torrent site in January.

Last Friday, however, it became clear that a much more ambitious operation had begun. Codenamed Operation 404 after the HTTP error of the same name, the action was announced by Brazil’s Ministry of Justice and Public Security.

During an early press conference detailing progress thus far, the Secretariat of Integrated Operations (Seopi) revealed that “136 websites and 100 applications” had already been suspended alongside the execution of 30 search and seizure warrants.

“After four months of investigation, it can be said that the action is a milestone for piracy in the country, which causes various damages to society,” said Alesandro Barreto, coordinator of Seopi’s Cyber ​​Operations Laboratory.

“I don’t know of another operation that has blocked so many apps and websites in one day. This is a very clear message and that the judicial police, through the integrated operation with Seopi, will act against this crime that cannot be tolerated.”

The authorities did not release the names of any websites or applications targeted nor specifically detail what “suspension” means in the context of any specific case. Suspensions can take many forms, from serious ones (raids and equipment confiscations, for example) through to ones that have a more limited long-term impact, such as blocking or domain seizures.

Details are fairly scarce but TF learned that a site known locally as Megacine announced that it had decided to close down following the operation. A notice now displayed on the football-focused site Futemax indicates that it is being blocked but is still online.

The Ministry of Justice states that at least in some instances it had worked with authorities in France, the United States and Canada to suspend domains, arrange “de-indexing from search engines” while suspending profile pages on social networks.

The operation is said to be receiving support from local anti-piracy groups including ANCINE (National Film Agency) and the National Council for the Fight Against Piracy (CNCP). Additionally, the US Embassy in Brazil, US Immigration and Customs Enforcement (ICE), and the US Department of Justice have reportedly played roles.

While the early figures presented (136 websites and 100 applications suspended) were already significant, local media reports suggest that the number is increasing fairly rapidly.

Globo reports that 210 sites involved in the unlawful distribution of movies, TV shows and live TV have been targeted, in addition to the initial 100 apps that provide access to “illegal content streaming”.

Raids have been carried out in 12 states in Brazil and in six states, at least eight people have been arrested. Details include:

Penalties for operating piracy sites or services in Brazil can reach four years in prison, more if other criminal aspects such as money laundering are involved.

According to the Ministry of Justice, up to 20 million households in Brazil access pirated content via the Internet but many citizens are said to have a poor understanding of which services are legitimate and which ones are not.