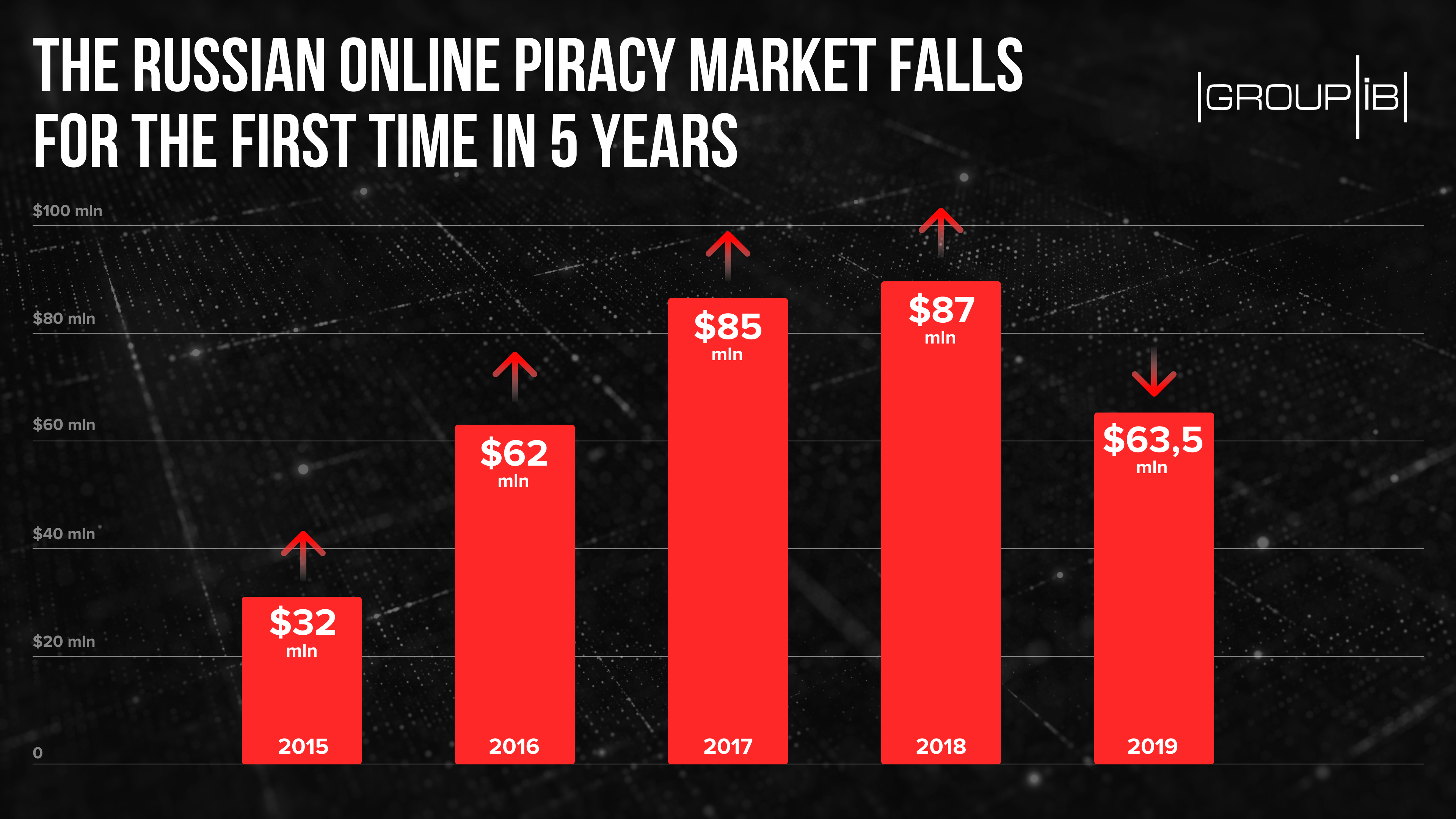 In Russia, pirate platforms have been experiencing an upward revenue trend for many years but according to a forecast just published by cybersecurity firm Group-IB, 2019 is set to be much less lucrative.

Revenues generated by pirate sites in Russia will reportedly plummet in 2019, largely thanks to the country’s ground-breaking anti-piracy memorandum. Cybersecurity firm Group-IB says that revenues are set to fall by around 27%, the first decrease in five years and a return to similar figures reported in 2016.

In what is becoming an increasingly competitive market, generating revenue by any means is a must for most significant sites, platforms, and services operating in the piracy space.

For background, in 2015 revenues were estimated to be $32m but a year later the picture had changed significantly with the market almost doubling in size to $62m. In 2017 there was a further 21% uplift to $85m but in 2018 things began to slow down, with a small 2.3% growth delivering estimated revenues of $87m.

In its latest analysis, the company states that for the first time in half a decade, revenues are set to collapse. Group-IB predicts a figure of around $63.5m for 2019, a drop of 27% compared to estimates for 2018 published last year.

The reasons cited for the dramatic downward shift are numerous. Russia has been tightening its anti-piracy laws almost every year, including site-blocking and in particular, the ability to block repeat-infringer sites and their mirrors/proxies on a permanent basis.

However, the “tectonic shift”, as the company describes it, came as a result of the voluntary anti-piracy memorandum signed in 2018.

Internet platforms including Yandex, Mail.ru, Rambler and Gazprom Media, in conjunction with major content companies, agreed to the creation of an infringing content database which signals which URLs to remove from search results. Around 600,000 links to pirated copies of movies and TV shows are currently included.

The arrangement officially expired early October but an extension was subsequently agreed, with an option to continue until the end of the year if a bill to enshrine its terms in law is submitted to the State Duma by the end of this month. In the meantime, the effects of the agreement haven’t gone unnoticed.

“In the previous years, even if pirated content was removed from a web page, a user still could open the web page, finding it in the search engine, and see the advertisement placed on it, bringing money to online-pirates,” says Andrey Busargin, Director of Brand Protection and Anti-Piracy at Group-IB.

“In 2019, on the contrary, a user was not always able to open a resource with pirated video content, even intentionally.”

Pirate site operators have other advertising issues too. Group-IB estimates that the average earnings for a pirate site via advertising are around $10,000 per month, with online casinos and gaming platforms providing most of the income.

“The active work of the Russian Federal Tax Service against bookmakers and gambling led to the pushing out of advertisers of pirated websites,” Busargin notes.

“For example, Azino777, a highly affiliated provider of advertising services for pirate CDNs, has already lost its leading position.”

Many streaming portals in the region utilize these ‘pirate’ CDNs which bundle video and advertising into a single package. As recently reported, however, several major players were either taken down after legal action by BREIN, the MPA, and the Alliance for Creativity and Entertainment, or shut down as a direct result. At least temporarily, this could be affecting up to 80% of the pirate streaming market.

Nevertheless, there remains a thirst among Russian consumers for pirated content, so solutions are likely to be found. Group-IB says that the volume of search requests seeking pirated movies and TV shows increased by 0.06% in 2019, to 10.4 billion.

But there is also a cultural problem faced by content companies. A survey published in September by security company ESET suggested that just 9% of respondents prefer legal content over pirated, with 75% citing high prices as their motivation.

That being said, their supply will only continue if pirate sites can make money at their end, so it will be interesting to see whether their 2020 revenues continue on a downward trend.